after amma’s palakkad program, amma visited the house of a long-time devotee. the house was situated in a congested colony. we drove through a narrow gully, winding left and right. people were pouring out of their houses: many came out on their balconies, many lined up on one side of the road. There was a waist-high wall on the other side of the road and people of all ages jostled and crowded the sides. 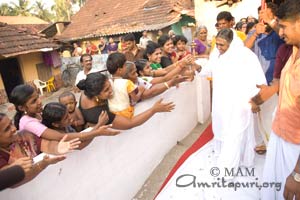 inside the small house of this devotee, amma did a very simple puja. when amma started  singing ‘amba bhavani,’ normally amma will sing the lead and everyone else will sing the response. however, today the lead was taken over by the 3 kids – anagha lakshmi, amrita lakshmi & akshyaya lakshmi. the eldest one is just 4 years old. they were standing right behind amma. they just would not allow amma to lead the bhajan. and they were so much louder than anybody else. it was a total cacophony!! but amma was enjoying every bit of it.

after the puja, they started praying aloud. amma asked them what they were praying for. 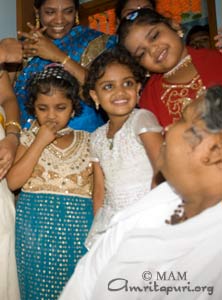 “we pray to do better in our studies,” they explained.
“you pray for that alone?” amma asked.
“yes, thats the only thing we pray for,” the children said.

then one of them started telling amma that she had seen goddess kali in a dream.
amma asked them what color kali was.
one said she was wearing red. another said she was wearing white.
“what did you tell her?” amma inquired.
“i could not complete my prayer, because there was no time,” the little girl explained.

as the discussion went on, each one was tapping amma, calling out “kali, kali,”” and vying to get her attention, and they continued to tell so many things to amma. they were so free–no inhibitions, no prejudices, all innocence and spontaneity.

at last, one of the girls touched amma and exclaimed, “i never knew kali is like this.”

everyone around including amma broke out in laughter.

i asked her, ‘how did you know this is kali?’
“my mother told me,” she said immediately and simply.
wow! what faith!
if only we had such faith in what our mother has told us.