250 children, all teenagers. staying w/o parents together in a building. having programs, starting from 6.30 in the morning till 11 at night – different talks, games, workshops, entertainment, discussions, yoga, meditation, dialog with nature and of course home food for all. it was prepared and served there. thanks to the teachers and other staff  who made this camp wonderful.

i believe that this is the first time in their life that these children are enjoying studies and learning some thing valuable for their life. the 5 picture programs were a proof for their creativity. it was amazing what they can think and create within 5 minutes with the available stuff from the room.

and the last day was soooo memorable. there were students just finished their course, but still were attending the camp. actually them came insisting that they have to join this camp as they will have it for the last time.

they were given a send off by the current batch of students. representing the passing out batch, one spoke, with emotions and respect, with tears in his eyes that he wanted to take his principal of the school where ever he goes. ‘if possible i would make her the principal of that institution’, he said. it was a very touching moment, as he prostrated to the principal. she also started crying. — a beautiful teacher – student relation ship.

almost every one was in tears as we departed, said good bye. wait.. there are about 100 students who refuse to go back to their houses. they wanted to stay back in the school. it was ok with them not to have food for the night, since all the cooks went and the big cooking vessel are all returned.
they were playing dancing in the school to the tune of the music. later, they them self helped to prepare some kanji and all shared that happily.
they were celebrating till 2.0 at night. 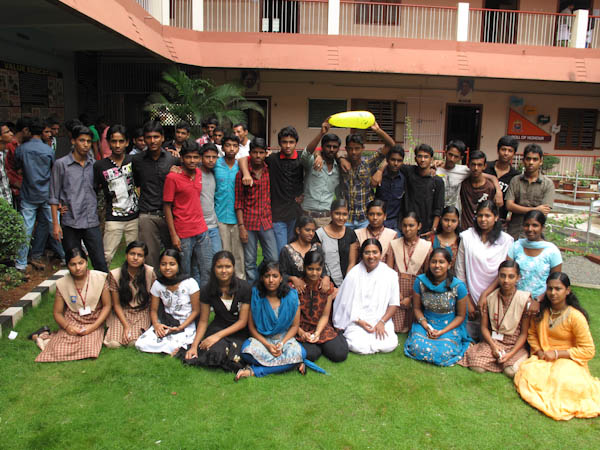 the next day we see that some of them have gone home and come back. many are still waiting to bid farewell. had some photo sessions with those kids. and when we were departing, some went away, were crying badly. some waving to us holding their tears back. look at their face, its about to burst and they ran behind the pillars.

may amma bless them to keep the values what they have learned from the camp.